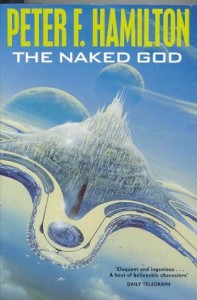 This is it, this is the grand finale to one of the longest trilogies I’ve ever embarked on, a grand space opera that aims to both epic in scale and incredibly personal at the same time. It’s a laudable aim and this book probably comes closest to achieving Peter F. Hamilton’s goal. The scale of this adventure increases once again, branching out into other constellations and star systems and even other universes but at the same time focus shifts from these cosmic matters and onto the individual choices and actions of our protagonists.

Following the same pattern as its predecessors Peter F. Hamilton spends half of the novel building on several separate plot threads, moving his characters around the board with such delicate precision and care nothing feels unnatural. Eventually series protagonist Joshua Calvert reasserts himself as the main character and drives forward the climax of the book, eventually becoming the single dominant factor that ends this grandest of all tales. That’s fine, it’s what I’ve come to expect from this series, although interestingly here Joshua’s thread is the slightest one yet. His journey ended last time with him becoming a major political player, destroying the doomsday weapon built by Doctor Alkad Mzu (who’s still present but not capitalised on at all here) to prevent the weapon falling into anyone else’s hands.

Here he finally becomes what he always wanted, an adventurer and explorer, a traveller on the frontier of space. His journey momentarily twins with that of Syrinx, as the two realise how similar they are despite their fundamental differences, before once again her story trails into obscurity. It is Joshua Calvert who becomes a representative of humanity and then finally the architect of its salvation. Whilst there’s something of a deux ex machine ending it is at least both well signposted and well explained, consistent with the universe that’s already been built around it. Additionally there’s a little irony in Joshua Calvert, who always reeked a little bit of authorial self insertion, literally attaining godhood and determining the final state of affairs for the rest of the cast. His journey finally ends with this eternal wanderer settling down, finding acceptance with himself and his actions (although as I pointed out in the first book, Joshua Calvert never makes a bad call and is always perfect, so of all the characters to find self acceptance there’s no surprise or tension in the fact that it’s him) and reuniting with Louise.

Louise spends most of this play on Earth, somewhere that’s been kept hidden from now, possibly because there’s quite a few surprises to play on humanities homeworld. She finds herself in London and quickly sets about warning the authorities about Quinn Dexter, searching for Banneth (his intended victim) and also attempting to get a message to Joshua. The slow almost chess-board game playing out between Quinn and B7 (the super secret service that rules earth from behind the scenes) is both intense and exciting, although for the first time in this trilogy I’d say it’s hurt by the larger narrative. Quinn is on earth carrying out his plans right at the end of the play and this slow lumbering plot thread is interspersed between everything else so slowly it’s frustrating that it takes so long to resolve itself. Whilst there are some great images and characters here (gotta love Charlie) the fast pacing that has characterised the rest of the series has sadly been lost.

Similarly slowed down is the liberation of Mortonridge, although there it’s representative of the story. Ralph Hitch leads the largest army ever assembled in a gruesome campaign to individually grab and contain the possessed, all for the purpose of freeing their host bodies. As neither side is willing to give ground there is a huge number of casualties and the author does an excellent job highlighting the awful waste of life on both sides. The relationship between possessors Stephanie and Moyo, introduced in the previous book, and their antagonistic relationship with Annette Elekund and their chance encounter with Sinon (Syrinx’s father brought back to life as an artificial construct) is one of the most touching stories contained in this volume. Forget the mumbo Science and cosmic events on display, this is an exploration of human dreams, hope and desire at its most fundamental.

The narrative also flicks back to Norfolk, where Luca is possessing Louise Kavanagh’s father and struggling to come to terms with his dual identity, and Valisk, where Dariat and the sentient habitat find themselves in an impossible situation. The Kavanagh storyline at least comes to a sensible conclusion following the wrapping up of Joshua and Louise’s plot threads, but the Dariat story is far more troubling. The eventual fate of Rubra and the thousands/millions of people aboard his ship is left fairly ambiguous, although there is a hint of hope in there. All I got out of it however is that he would have been better off not fighting throughout the entire second book and just letting events play their course – their momentary victory then was in fact a precursor to a terrible fate. Although that does appear to represent the message of this story – whether the universe is kind or harsh to you, acceptance of yourself and your abilities is paramount.

Al Capone’s organisation is dealt with, although it now is little more than a setting for the confrontation between the Skibbow’s and Kiera (possessing their daughter’s body), and Rocio verses Etchells (both possessing starships). For half of this novel this story zings along delightfully, with plenty of surprises and shocking twists, and the way that all those characters arrive in another galaxy at the same time as Syrinx and Joshua should have led to an epic confrontation. Sadly the confrontation is little more than a stalemate and the  confrontation is dealt with in the same overbearing manner as the rest of the galaxies problems; Joshua waves his hands and the possessors are gone.

The final major story thread is the xenoc races; firstly the Kiint who have been watching this entire debacle unfold with interest but without any intention of intervening. There are human(ish) agents working for the Kiint who wish to help but are unable to do so, and amongst them young Jay Hilton, now our only main character from Lalonde in the first book (save Quinn himself) relevant to the story. Secondly a fairly damning view of the Tyrathca is built up, revealed to be an all conquering race of soldiers spreading across the galaxy like a plague. On their quest for the Sleeping God Joshua and Syrinx learn that the seemingly-inevitable collision between humanity and their neighbours could be a much greater threat than even the possessed represent. However towards the very end Peter F. Hamilton introduces a third alien race, one who answer questions about the Tyratcha that were so obvious we hadn’t bothered to wonder about them, and give Joshua Calvert a very moral dilemma. I almost wish more could have been made of the Mosdva but they aren’t the point of this story, their tale is another one entirely.

It’s this enormous sense of scale that gives the Naked God it’s power. The Neutronium Alchemist showed events spiralling out of control, showed the inevitable confrontation between un-opposable forces. That things would end like this is almost inevitable – in fact that there is a satisfactory ending at all is a miracle. This isn’t about the wars being fought, about the political manoeuvring going on throughout or struggles for survival, it’s about what it means to be human and what that means you’ll do to survive.

An excellent book, as they’ve all been. In review I’d say that ‘The Reality Dysfunction’ struggles a little under the weight of its ambitions, but is a solid performance. ‘The Neutronium Alchemist’ is perhaps the strongest of the three, capitalising on solid idea introduced in the first with a few key improvements to add, and whilst ‘The Naked God’ isn’t quite as well managed as a book it is a suitably grandiose climax to a series that challenges you on every level.

Addendum One:
The cover for this book is fantastic; it’s so bright and enticing. It’s also the reason I am here reviewing these tomes. I recognise it; at some point my father must have read this trilogy as when I was a child it sat for many years on the bookshelf by the telephone. When I saw it in the shops I recognised it immediately. ‘The Naked God’ boasts the best cover and the best title of the trilogy (both ‘Reality Dysfunction’ and ‘Neutroniun Alchemist’ are horrendous mouthfuls). The question who/what is the naked god plagued me. I had to know. And though it’s taken a ‘looooooong’ read to get there, it was worth it, although by the time I got there the question is redundant. It’s now ‘who’ is the naked god, it’s ‘why’ should we search for it?

Addendum Two:
I’d just like to skip back to the modern day for the moment and draw a parallel with something fairly recent in the world of 2013. Though its in a different medium you may be aware of a video game called ‘Mass Effect’ a space faring trilogy which bares some striking resemblances to this magnum opus.

The first video game / book show a vision of the future where humanity has spread across the stars and met alien races. On the cusp of achieving greatness a single disastrous event on one world triggers a chain of events that threaten to bring the alliance to its knees. It appears that the fate of a long extinct race may be the key to understanding what is going on. One single captain and his crew travel around, meeting aliens and other worlds, forging alliances and at the end of the first chapter win one ‘small’ victory. However they are more than aware that victory is meaningless compared to what is to come.

In the second chapter tensions rise as the ‘threat’ spreads across all of occupied space, threatening our very way of life. The Captain and his crew are sent on a mission to procure a great weapon / prevent the enemy gaining one, potentially loosing some of their allies along the way.

In the third chapter the action moves back to earth, humanities homeworld, where it appears the final battle will be settled in London. Meanwhile the captain goes on a desperate mission, searching for allies/weapons with which to fight this terrible threat, whilst the galaxy itself is under threat from the turmoil. In the end the captain is presented with a choice and a way to end the war, although the war itself is not the problem. It turns out that this is a conflict inherent to life itself, and a consequence of sentience existence.

I’m not saying they stole ideas, I’m just saying if you enjoyed the storyline of the video games you’ll find plenty to enjoy in the Night’s Dawn trilogy. It truly is an epic, and still relevant with messages to teach the Mass Effect generation.