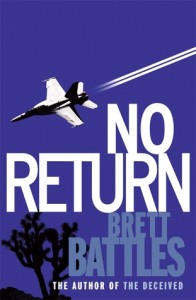 I received this book as part of a Goodreads Giveaway at the end of 2012, and I’m glad to say it continues the trend of high quality fares available from this site. Brett Battles ‘No Return’ is an excellent mystery/thriller story which is partly about the navy covering up the death of a US Fighter Pilot but also partly about one man’s return back home for the first time since childhood. At its heart is a strong, surprisingly affecting tale about facing up to the consequences of your actions, something lead character Wes has been hiding from for fifteen years. This is something I’m glad of because the ‘high octane’ blurb on the back didn’t sell itself to me nearly as much as the close-nit tale Brett Battles story deserves.

The cast of characters are clear and precise. Wes is a compelling main character with little apparent depth but a few deep mysteries and secrets that he’s holding close to his chest. You learn about him  primarily through his interaction with others; he’s smart, competent, fairly easy going and just a little bit cynical. His co-workers come in some fairly light flavours; jackass, bitchy, love-interest, ex-love interest and control freak, but the broad brushstrokes aren’t a complaint as this book really isn’t about them, it’s about Wes and their involvement is purely to place him and his career first. The most engaging secondary character is Larry, an old friend of Wes who now works for the navy, and throughout the novel switches between ally and foe several times. Larry and Wes share a secret, one that isn’t fully explained until the very end, but it’s not a dark brooding one that dominates the book but a short subtlety hidden in plane sight. Why didn’t Wes ever come back home?

Everything is tied together with a conclusion that kept me awake long after I should have turned in for the night. There is one loose thread that I’m not 100% certain on (in the car chase scene  who was chasing him? There were two cars chasing him whilst someone was in his hotel. Either the navy were in his hotel and the cars were the husband/wife, or one of the husband/wife was in the hotel whilst the cars were the navy, or one car was the navy and the other the husband. I’m not confident that was ever cleared up. I think it’s the former but it was never addressed.

It’s a snappy page turner, bursting with plot and a surprisingly affecting back story. Definitely a thumbs up if you want some light reading this year.