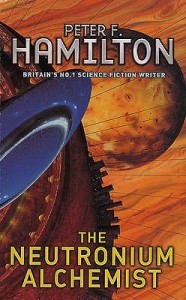 ‘The Neutronium Alchemist’ demonstrates many things; drama, action, wit, intelligence but most of all it boasts staying power. I read and enjoyed ‘The Reality Dysfunction’ although I commented on how bloated it felt; incorporating many plot threads that went nowhere or weren’t developed upon. It’s a description I stand by, the first book in this trilogy could have been a much tighter more condense read, however those extra chapters weren’t just fat. Slowly but surely Peter F. Hamilton has been placing all the pieces on the board for an enormous free for all which ‘The Neutronium Alchemist’ boasts freely.

It isn’t perfect however. Once again Peter F. Hamilton spends the first half of the novel using one set of characters before moving on for the second half when his attention flits back to Joshua Calvert. This isn’t a bad thing. For all the positives and negatives about his chosen hero, Joshua has the benefit of a proper journey. In the last book he made the transition from ‘scavenger on edge of society’ to ‘interplanetary merchant adventurer’ to ‘reluctant war hero’. Once he finally gets involved with the plot he is tasked with a spot of ‘detective’ work, forcing him to stick his nose in the way of several covert intelligence groups, and towards the end there are some brilliant action sequences which force him to face his own mortality for the first time. Joshua Calvert is not a complex creation but he does have staying power. He is, however, almost entirely absent for the first third of the book. I picked up the ‘Neutronium Alchemist’ eager to read what would happen next. I wanted more of Syrinx, more of Dr. Mzu and more of Quinn Dexter. All those dangling threads are picked up but not until the story has thoroughly explored two new main characters.

Warning: If you haven’t read ‘The Reality Dysfunction’ and care at all about plot twists, stop reading now. I didn’t spoil the nature of the enemy in that book but I’m going to have to here. I repeat, if you care about spoilers STOP READING. You have been warned.

The first actually played a minor role in ‘The Reality Dysfunction’, as secret operative maintaining surveillance on the planet Lalonde. His appearances were as the commanding officer of another character, one who met a grisly fate attempting to capture one of the possessed and escort them offworld for study. Now Ralph has a guilt complex about her death, about what happened on Lalonde, and he sets about redeeming himself by attempting to warn his superiors about the danger and successfully control an outbreak on the planet Ombley. At the start of the book we see Ralph running in all directions, desperate to get the quarantine to work, him and the reader all too aware of the high stakes even though (at first) his fellows don’t quite believe or understand the danger they’re in.

Yep, you read that right. To be honest when Peter F. Hamilton revealed the nature of the enemy in ‘The Reality Dysfunction’ I was a little taken aback at how offhand the revelation was. There were a few vague hints, then a minor character announced it at the end of a chapter in a sub story almost unconnected to the main plot, then it took a little while for anyone else to find out. It seems he deliberately wanted to ease us into the idea, to let it settle before exploring it more thoroughly. In truth the concept is simple: “the living are being possessed by the dead.”

In execution however it’s anything but. In ‘The Reality Dysfunction’ none of the possessors were given breathing room to become actual characters, save Shaun Wallace who appeared at the end to put some much needed context on the whole thing. All we knew were they were humans who had died and come back from the void beyond, terrified by what they’d seen and now refusing to go back even at the expense of their hosts. When the truth got out a few minor characters mumbled questions about what this meant ethically, philosophically and religiously, one even wondered what would happen if Hitler or Napoleon came back. With that teasing in the first book it seems the author quietly set themselves a challenge.

I have to say I was blindsided by his choice of candidates, yet somehow it makes a certain sense. Whilst not an expert on Al Capone, the little I do know of him fits entirely with the vision presented here, not ‘just’ a little two bit gangster but a man who knows how to use people. He comes back from the beyond on the planet New California and quickly sets himself up as leader of the possessed. Recognising the futility in just running around blindly, converting more and more people, he goes straight to city hall and has the mayor possessed. He quickly sets about building an organisation that can run the world beneath him, and then when that’s done sets about building a fleet to expand into the cosmos.

These two scenarios play out simultaneously, Ralph frantically attempting to save one world whilst Al Capone goes about destroying another. With a few intermissions that’s the first third of the book, and despite the few misgivings I have about what I ‘wanted’ to be reading, it’s a gripping read. The characters and storylines developed before aren’t forgotten, Peter Hamilton just needs to bring these two threads up to speed before letting everything else play out.

But bizzarely after the halfway points Al and Ralph only appear intermittently. From that point on there are three entirely separate notable storylines that are clearly developing by the half way point; notorious scientist and inventor of the doomsday weapon ‘The Alchemist’ Doctor Alkad Mzu, who had a minor role in the first book, has escaped her prison and is attempting to get revenge on the planet which destroyed her home world. Unfortunately her timing couldn’t possibly be worse; she’s thwarted by the appearance of the possessed at every turn, both physically and emotionally. Eventually she realises that there’s no point to her vengeance. All humans are destined to die eventually and if she goes ahead with her plan she’ll just be swelling the ranks of the dead even further.

Several surveillance agencies are hot on her trail, joined by Joshua Calvert who is dispatched by Ione to bring her back to Tranquility. Eventually Capone’s organisation learns about the doomsday weapon and they join in the chase. The confederation can’t risk the Organisation getting their hands on that weapon. Also they can’t risk Doctor Mzu dying, as then she’ll become one of them. Desperate to catch her but unable to harm her, the chases crosses several star systems and doesn’t let up right to the thrilling conclusion.

The second plot thread concerns Quinn Dexter, who has set himself up as a dark messiah, having overcome possession and gained god-like powers in the process. He starts on the planet Norfolk, terrorising Louise Kavanagh (a girl carrying Joshua’s unborn baby, not that he’s aware of this) and she flees off world with possessor Fletcher Christian. I have to admit my ignorance. I had no idea who Fletcher Christian was. When his true name is revealed the surprise it was supposed to generate passed me by. He’s a noble character however who pledges to protect Louise and her sister and escort them off-world. Not all of the dead are evil after all.

Quinn also gets off world and co-incidentally follows them to the planet Nyvan (which is where Dr. Mzu happens to be at that point in time) where he sets about destroying the entire planet. Whilst Joshua, 3 surveillance agencies, the local police and the organisation are involved in a massive car chase, he sits in orbit attempting to detonate several asteroids to smother the planet in a deadly meteor shower. Quinn is mad, bad and dangerous, his eventual goal being to get to Earth and repeat the carnage there. He gets a lot of development however certain scenes are just a little too long and too arduous. I’m aware of the journey he’s gone through, the character motions that bring him to this point, but it all feels a little off. The truth is the most engaging thing about Quinn’s character is the effect he has on others is more interesting than the character himself. For the majority of this story his only companions are obedient ‘servant’ possessed, ciphers there to do his bidding. His actions are felt by others, their consequences affect the larger plot, but aside from some very short sequences Quinn is denied the chance to directly interact with anyone of substance.

The third plot thread involves Dariat and Rubra, a father-son conflict which an astronomical difference. Rubra is a sentient habitat, an orbiting asteroid with a city and a whole ecosystem inside him. He was once human but uploaded his conciseness into the computers that run the habitat. He’s a rude, ambitious and stubborn character, streaked with sarcasm and a silent anger. Dariat is one of his descendants, one who Rubra once saw promise in but who turned against his mentor when he fell in love. Both were introduced in the last book (Dariat was the first to name the possessed as the dead) but its here where their story is developed. Dariat has allied himself with the possessed, committing suicide and possessing another descendant, and is raging all out war on Rubra. The possessed take over the habitat but can’t get rid of Rubra, who turns all the machinery against them and taunts them continuously. Eventually Dariat’s shaky alliance with the other possessed fractures, he has different goals to them, and when they turn on each other Rubra offers Dariat a truce and a possible solution. Though entirely distant to the other plot threads I found myself looking forward to Dariat chapters the most.

There are a few other small groups of characters interwoven amongst all this. Again it all hangs together, and despite being the same length it doesn’t feel quite as bloated as its predecessor. Lalonde was event zero, the first book just a scene setter, and now that all his toys are out the pram Peter Hamilton uses this book as his chance to reek carnage. My one complaint is that once again Syrinx, who showed great promise as a central character at the start of the first book, is a very minor player here, relegated to the sidelines as she overcomes her trauma from the first book. Like its predecessor it takes a while to decide exactly what the main thrust of the story is, eventually focusing in on a few key moments at the expense of everything else. At least it leaves a lot of potential for the sequel. In the end the main three storylines (in the last half of the book; Dr. Mzu’s weapon, Quinn’s attack on Nyvan and the Dariat-Rubra conflict) are all resolved satisfactorily. It also boasts one of the best cliffhanger endings I’ve ever read, remarkable both in shock value and simplicity.

Escalation might be the theme of this book. Whilst ‘The Reality Dysfunction’ bowled concept after concept at the reader, constantly innovating with bright new ideas, ‘The Neutronium Alchemist’ only introduces a few simple new characters and ideas and uses them to tie together everything that came before. Nail biting from start to finish.