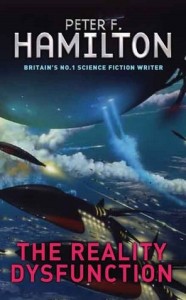 Be warned: ‘The Reality Dysfunction’ is a long book. Over 1225 pages, and even then it provides only the first chapter of a truly epic story that spans multiple solar systems, species and planes of existence. If I had to sum up Peter Hamilton’s achievements here in one word I would simply use ‘epic’.

Yet it is above all other things difficult. In every one of the first ten chapters the book presents a brand new character, a brand new world, a brand new story each of which could easily be a book in their own right. There are many long words and difficult concepts that take time to sink in and honest to gods the ‘actual’ plot doesn’t start until page 400. This is not a read for the meek.

I would also caution readers not to visit the wikipedia page for this series (conceptually named ‘Night’s Dawn’). It very bluntly states one of the key secrets of this novel, the true identity of the enemy, something the author takes great pains to keep hidden until the final third of the book. I won’t mention that spoiler in this review but trust me, whether you end up liking or disliking the concept, the reveal is far better if you don’t know it in advance. Knowing it I kept waiting for a revelation that never properly came, just slowly planted piece by piece until finally just acknowledged as fact.

Perhaps due to it’s sheer scope some things get lost along the way. Several characters who at first appear to be important simply disappear once the book does start to gain momentum, presumably to return in a sequel. Syrinx, who at first could appear to be the central heroine, simply vanishes after the half way mark, never to be mentioned again. A shame as I honestly thought she was one of the most interesting characters in the book, although in retrospect she exists solely to introduce us to Edenist culture.

It eventually transpires the central character is Joshua Calvert, who undergoes a journey from stricken scavenger to plucky starship captain to reluctant war hero. The author has admitted to writing a ‘straightforward’ Han Solo character and there’s none more straightforward than this. Every decision Joshua makes is the correct one (or later turns out to be) and he is proven only to be fallible by his inaction (and even in those cases he has an uncomfortable itch that something wrong is going down). There’s potential for depth here, and a slight leaning towards a personal journey (at the end another character lightly reprimands him for his appalling attitude towards women and he admits, yeah, he can be a bit of a douche) but the truth is Joshua is fairly bland character. It’s a shame he takes up so much space when he is surrounded by so many fascinating stories that are only briefly touched on.

One of these interesting concepts is Ione, the female ruler of the space station Tranquility who is bonded with the ship. At first it looks like this will be a fascinating exploration of absolute power, as Ione starts the book a secret ruler who reveals herself to the population and takes Joshua on as a consort. But from there she fills only two roles: a handy viewpoint for exposition dumps about the backstory and many, many sexual encounters with Joshua (and others). In fact if I’ve one real complaint it’s the book’ attitude to women. There are plenty of strong independent females but all of them without fail are shown in a predominately sexual light, particularly in relation to Joshua Calvert.

Other standout characters include Father Horst, a failed priest looking for a chance to start a new life, who fails and falls into a drunken stupor and then redeems himself later. Though an excellent story his parts are small and fragmented, spread thinly amongst the far larger arcs Joshua is weaving. Of the villains Quinn Dexter stands out early on as a convicted criminal, banished to a work camp on the frontier world, who plans his escape. Sadly, just as Quinn finally fulfills his ambition he also pretty much drops out of the story just after page 500, presumably to reappear in the sequel. Laton is billed as a potential new evil to supplant Quin but his story is kept largely hidden from the reader in order to protect vital secrets.

In truth there are so many point of view characters the above barely cover two thirds of the book. After such a hectic and broad introduction I presumed that by page 700 Peter Hamilton would have created enough disparate threads and would now start to weave them together into one narrative. Yet to the very end he constantly adds new, vital characters and settings (the tragedy of space station Rubra, the Irishman Sean Wallace, etc…). It’s not as though the book doesn’t have an ending, it comes to a very neat conclusion, tying up the story on Lalonde with a brilliant act of bravery from Joshua (and crew) but 90% of the things Peter Hamilton has introduced are left hanging.

This is only the first third of a trilogy and Peter Hamilton leaves plenty of fertile ground for his sequels. There are flaws in the narrative, things that could have been tidier and elements of indulgence from the author that can’t be overlooked, but the sheer scope and epic scale of this story are undeniable.

Recommended only for strong Sci Fi readers with plenty of patience, but well worth the reward if you approach with an open mind. A 90s classic well worth looking up.