Or the ‘Slow Painful Death of Reality’… 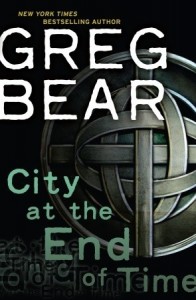 There’s a brilliant tale somewhere in ‘The City at the End of Time’, it’s a book full of pregnant thoughts and weighty expectations but in the end I admit I was left just as unfulfilled as I did when launching into this difficult piece of prose. By splitting his story between so many characters the author, Greg Bear, risked spreading his story too thin but in fact it’s perhaps the characters themselves that let the grander tale down.

The story follows several sets of characters; in the time period ten zeroes (presumably set in the future but with nothing in the book making it clear this is the case) Jack, Ginny and Daniel are all ‘Sum Runners’, characters who can shift fate and dive between worlds to a parallel reality more to their liking. Ginny is the perennial bad penny, a frightened girl who makes the wrong choice every time and then flees. Jack is a lonesome busker, making the best of a bad job. Daniel is more challenging; he’s shifted into a parallel world into another body not his own. Bereft of his old life and memories he has no personality or memories, just a burning need to survive no matter what the costs. Jack and Ginny both dream of the future, of the city at the end of time, whilst Daniel dreams of nothing.

In this city (in the time period fourteen zeroes) Tiadba and Jebrassy dream of Ginny and Jack respectively. Both are breeds, lowly life forms engineered by Ghentun and the Librarian (or Polybiblios) for a great purpose unexplained for at least half the book. In the future it appears humanity has evolved into a myriad of forms inexplicable compared to what we are now, but the breeds are an attempt to recreate their ancient heritage. So Jack and Ginny dream of Jebrassy and Tiadba, and vica versa, both sets of characters intruding on the others lives. At the start of the novel this is shown to be a terrifying and scary process, ‘straying’ as it is termed is a random and non-chronological process (Ginny dreams of Tiadba’s future on several occasions) yet by the end it seems almost as though the characters are in constant contact with each other. The progression here is awkward and ill defined, aside from constantly repeating that the link exists very ground is made exploring this plot point.

Eventually, although nearly two hundred pages in, it becomes apparent that what’s happened is the catastrophic downfall of humanity. A chaotic influence (sometimes dubbed the Typhon, sometimes called other names) is rewriting the rules of the universe and spreading out to engulf everything. This has resulted in chaos, a zone with no rules or fixed constants, where the physics that result in constants like ground, air, light can no longer be relied upon. Humanity once had an empire that stretched across the stars but all of that is gone; now only one planet (less in fact, just one city) remains. On this city, the Kalpa, the great Librarian Polybiblios has entrusted Ghentun, the keeper, to create a race of primitive humans who can survive in the chaos, who can venture out to the lost city of Nataraja where his daughter (a muse created by the alien creatures the Shen) might have the key to saving the universe.

In the past (ten zeroes) Ginny and Jack are hunted by chancers, people working for the White Queen (an agent of chaos???) who wish to prevent the Sum Runners from being reunited. Two hunters stand tall, Max Glaucous (who is far and above the novels best character) hunts Jack, and the enigmatic Whitlow hunts Daniel, the Sum Runner who does not dream. Meanwhile Ginny encounters the elusive Bidewell, an ancient librarian who has been preparing for the end by studying books. You see, as the chaos in the future rewrites the laws of existence, it has also been rewriting the past. Time is being chewed up and broken down and the best way to observe this is to note how books are being changed. At the start of the novel Bidewell notes grammatical mistakes are disappearing, appearing, small commas inserting themselves to alter a paragraphs fundamental meaning or disposition. By the end of the novel as the affect accelerates the written word descends into a free for all. Of course this writing means nothing unless it is read, unless it is observed. It’s a fascinating comment on how observing something fundamentally changes it, or in this case prevents random change from occurring.

However Ginny and Jack are sadly afforded so little character of note (and neither is Daniel, although there is plenty of plot reasons for that). She is shown fleeing, but what from is not made clear until towards the end when her backstory is filled in. Her character does not progress, just constantly fretting about the bad choices she makes by running before accepting her fate and running again. Time and time again she appears to find sanctuary before turning her back. Towards the end a myriad of alternate Ginny’s are displayed, girls who were not as lucky and were caught by their hunters. How this can be the case I’m not sure though as the one reputable characteristic of the Ginny we have followed is that she makes wrong choices. Perhaps though they weren’t wrong, she just can’t accept her situations.

Setting wise very little ground is covered in the past, besides Bidewell’s library very little appears interesting or relevant for much of the book. Daniel’s character hunts out someone he believes may help him, and then finds a girl who he believes may be related to him, but with the eventual revelation of his backstory this presumably was a lie. The time period ten zeroes is entirely unengaging save for the characters that inhabit it. This is in sharp contrast to the time of the Kalpa which is entirely interesting but the juicy details are held back until the novel is half way over.

It’s incredibly difficult to invest in a story that struggles so hard to keep you at arm’s length, to shroud itself in confusion and misdirection at every turn. Absolute certainties are slowly broken down, normal plot twists and turns ignored entirely as the slow beat of the Typhon marches onwards. Greg Bear’s prose is excellent but until Tiadba ventures forth into the Typhon on her march it serves little purpose.

Whilst the ending and the slow realisation of the true events being portrayed here have merit it struggles to justify the long investment reading this book has been. In the end Daniel’s true original self is revealed, the librarian’s erstwhile daughter completes her task and the sum runners are re-united. The witches, Bidewell, Glaucous, Whitlow are all cast aside as stories left unfulfilled as Jack and Ginny venture forth into a new and exciting universe, ready for their stories to begin anew.

This isn’t a book about characters or plot, it’s about the slow, painful death of cause and effect, of meaning itself.