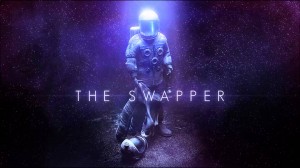 By which I mean do you consider yourself as a physical entity, as a mobile collection of limbs and organs that can move and think and communicate with like-minded individuals? Or is there an inner you, a ‘soul’ if you will, that just uses your body simply for transport and stimulation? Are both viewpoints equally true?

And how could a video game mechanic possibly be based around such a question? Facepalm Games clearly gave this some detailed thought because the story and the game mechanic both explore this theme thoroughly, a rare combination of the plot and playstyle merging seamlessly. You play the eponymous ‘Swapper’, a nameless individual given a device that can instantly create an exact clone of yourself (up to four at a time) and swap your mind between them. The mechanics are simple; walk, jump, point and shoot, all with the aim of navigating your way around a ruined spaceship in pursuit of knowledge and freedom. The plot is relaid mostly through discovery log entries recording the downfall of the ship, although there are some cut scenes when you encounter the surviving crew members. Dialogue is light but frequent enough to slowly draw you into the game but most of the story is relaid by the atmosphere and the content of the games. But the most controversial aspect is the act of swapping yourself.

The challenge starts easy, you using the swapper device to cross large gaps or open switches in one place whilst you pass through a locked door. But before long you are using consecutive swaps to zoom through the skies, using the device to save yourself from hitting the ground at the bottom of a long drop by creating a new clone just above the ground and leaping across to it. The sensation of landing apparently safely just to see and hear a soft thump as your previous ‘shell’ hits the ground becomes either an ominous companion or a cathartic release. You begin to question whether the pile of corpses you leave in your wake really were just empty shells or were they true duplicates of you, living breathing creatures who just had their tragic existence cut short after you switched with them to save your own neck.

As you explore the ship you begin to discover the ominous ‘Watchers’, sentient stone monoliths that impart their current thoughts on you as you pass by. The entry logs on the ship refer to the Watchers as the cause of the catastrophy, but the solitary stones you encounter at first are sombre, sad creatures mourning their removal from the ‘great chain’. Somehow these lonely stones have, in a way never explained, killed the entire crew of the ship, although they may not even be aware of this as they only perceive telepathic thought and seem to struggle with the physical dimensions of space and only a rudimentary understanding of time as the difference between then and now.

The fellow survivors you encounter exhibits signs of a split personality, for reasons that become evidently clear and important to your own backstory, and each shows you a different take on the moral quandary; spiritual belief, cold hard cynicism and mind numbing terror. Each viewpoint may help or hinder you and the assertion at the end (in one ending at least) that life, in any form, equals hope seems a desperate attempt to cling back self control after what looks like a disastrous loss.