The Light Fantastic is an excellent justification. 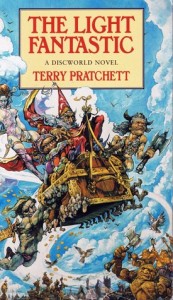 The Discworld is a place that follows archetypal fantasy but does so through the lens of cynicism and wit. It’s scope comes through a little clearer here than in it’s predecessor the Colour of Magic. Rather than riffing off high fantasy books with warrior maidens, gambling gods and nameless horrors it offers a cottage made of sweets, an aged Conan the Barbarian and a political struggle within the halls of wizardry as the wizard Trymon plots his way to the top. The set pieces (because like it’s predecessor the plot is little more than a loose movement from one moment to the next) are much shorter and snappier, resulting in  much better flow. Perhaps the most significant improvement in this book is that it has more than two real characters.

Though Terry Pratchett has a great gift for imbibing a hook into every character he writes, pushing one quirk or humanizing detail to give them life, most serve only to advance either the plot or a joke. In the first half of this tale only a few characters besides Rincewind and Twoflower had any real depth, as they came and went so quickly, but The Light Fantastic shows the reward of sticking with good characters. Trymon is an excellent villain with real depth, a man whose selfishness threatens to destroy the world, and by putting this academic superstar against the dropout Rincewind we finally get some evolution in the main hero. Though fun at first Rincewind is not an ideal protagonist, a theme I shall return to with future books. And whilst his character doesn’t exactly… develop here it does go through some important experiences that mesh well with the story of the book. And at the end the underlying plot (that despite initial appearances does exist and was just biding it’s time) hangs together on a few clever revelations that subtlety reward big questions posed in the first book without explicitly answering them.

If the Discworld had begun and ended with two books it would have been an extremely diverting aside but little more. There are great ideas here but until this second book little patience to fashion them into a cohesive whole. It’s deliberately written in an anarchic style, rebelling against the genre, taking pot shots at it’s source material rather than focusing on its own ideas. This is witty, and often fun, but the balance is fundamentally flawed. However the blueprints for something far bigger just may have been set down.