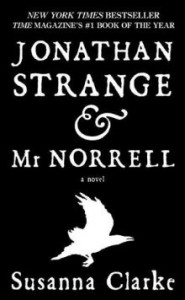 In any media there’s always a battle between artistry and functionality.

There are writers who are artists at their craft, who fashion words and sentences into things of beauty, and others who just use them to convey a message, for whom the story is paramount and things like proper grammar and sentence structure are merely tools. There’s probably an entire scale between each end of the paradigm and you could fit your favorite writers along it, comparing those whose words are just functional against those who take pains to ensure every word is ‘perfect’. Comparing those with the most engaging and mind boggling plots but who can barely string a straight sentence with those artisans whose story boils down to no more than a contemporary update of Romeo and Juliet.

Imagining that such a scale exists, I have spent the last three days trying to puzzle exactly where Susanna Clarke’s ‘Jonathan Strange & Mr Norrell’ fits onto that scale. It is, without a doubt, one of the bulkiest reads I have encountered in a good few years, the story is both long and slow moving, absolutely crammed with character details and small asides with no relation to the main story, but oh my god it is a thing of wonder. Susanna’s expertly crafted words had me hooked right from beginning to end. This truly is a novel containing everything but the kitchen sink, boasting an unhealthily large amount of world building that bares no relation to the central plot but that never once strays into the realms of tedium. It crosses the ancient city of York, London, the surrounding counties, Spain and Brussels in the Napoleonic war, Venice, the world of Fairy and another on the far side of that. Its myriad characters inhabit their world so succinctly and exactly that it reads more like a historical document than a work of fiction.

Yet, at the end, after so many hundreds of pages, Susanna Clarke managed to astound me with such an incredible sleight of hand, such a determined array of plot twists and turns that I was stunned. Just as I was beginning to suspect there was no ‘overall plot’ everything, and I do mean everything, comes together in one brilliant set piece. On my imaginary scale of functionality verses artistry, Susanna Clarke sits at both ends at the same time.

This is a truly excellent, if long, read. I’ve read books which recount the life story of one character before and they tend to be long, difficult journeys with just a few points of interest, yet this is a novel which chronicles two fully fledged, entirely believable characters and has plenty of room for their immediate relations, all fantastic characters. It’s based in an alternate version of England during the Napoleonic wars, and whilst Bonaparte never appears his presence is felt throughout the story. There are a few real characters, such as Lord Byron and Lord Wellington, who offer a ground point and more than a little humour. To complement the strong cast of characters and the atmospheric setting, the magic system is never thoroughly explained but so detailed and well sketched out, I’d be more than a little curious to hear what authors like Brandon Sanderson make of it.

Yet, this is so much more than just a fantasy novel; it’s a great read regardless of your favourite genre. If you’re looking for historical settings, war, romance, magic or just a good book, this comes heartily recommended.