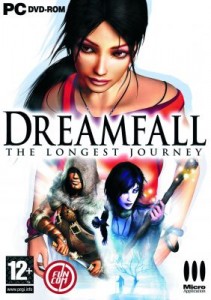 Although this 2006 adventure game wears its 1999 point-and-click predecessor ‘The Longest Journey’ proudly, I think it’s important to remember that they are fundamentally very different beasts with separate goals and intentions. The point and click gameplay is gone, replaced with a rather bland walk and touch mechanic. The main character April Ryan is gone, relegated to a supporting role, although in her place we have a brand new intriguing heroine. The full bodied adventure in which the main character discovers herself in a fulfilling journey that culminates with the saving of the world is replaced by something much darker, more twisted and spiritual. Thankfully they have retained the brilliantly paced storytelling, superb voice acting and multiple interwoven intricately plotted threads that drag you through a narrative heavy game that offers little besides its heart and soul.

Many of its strengths and weaknesses derive from the change in engine. Whereas ‘The Longest Journey’ was controlled via interacting with object with the mouse, Dreamfall adopts a fully realised 3D environment which is yours to explore. I noted in my previous review that the graphics of its predecessor have not aged well; fortunately that is not the case here. It looks about as good as a video game from 2006 can hope to now. There are some wonderful vistas, some brilliant settings which despite being last generation graphics still look impressive today. The engine however is dated. Characters can barely interact with their surroundings, capable only of walking on flat surfaces and touching rare, specified items. Despite appearing lavish on the surface, the game is actually far sparser and emptier than its predecessor.

With series star April Ryan reduced to a supporting role, we are introduced to newcomer Zoe Castillo to take the lead. Her journey is fundamentally different from April’s. At the start of the game she is drifting, purposeless and alone. Bright, intelligent, a little lonely, we’re eased into her life in Casablanca before her world comes crashing down around her. It begins as a detective journey, her boyfriend disappears and Zoe vows to find him, but her search puts her in the path of an all powerful international corporation determined to hold its secrets close. During her adventure she’s haunted by the visage of a young girl who demands she ‘save April Ryan’ and is several times shunted across to the parallel world of Arcadia.

In the magical world of Arcadia, which was a full half of ‘The Longest Journey’, April Ryan is engaged in acts of terrorism of the occupying army of Azadi who have colonised the city of Marcuria. April acts as a secondary main character for brief segments, and newcomer Kian Alvane becomes the third main character, an Azadi assassin sent after April to bring peace to the area. In the previous game April was a bright and engaging character, but here, ten years older, the new April is sullen and uncooperative, scarred by the life she’s lived since the previous game. Kian’s segments of the game are the most unsatisfying; they are both brief and highlight the biggest problem with the game engine; combat. He controls clumsily, hacking and slashing blindly with his sword with large delays between each movements.

‘The Longest Journey’ impressed with its wide range of locations, effortlessly creating a brand new world which was vibrant and engaging. The world of Arcadia was wild and untamed; however most of the Arcadian sections of ‘Dreamfall’ are set in the city of Marcuria, now under Azadi occupation. There are brief visits to swamplands or the Dark People’s city but the bulk of the game is straddled to this one setting, in order to build a deeper, more intricate political situation.

At times it appears Zoe, April and Kian are set on a collision course but this somehow fails to materialise. The first time April and Zoe meet the former refuses to get involved and literally sends Zoe packing. There is a short encounter with April and Kian where neither is aware who the other is but again this exchange goes nowhere. Maddeningly the full resolution to this side story is not presented, the game ends on a dramatic cliffhanger which is made all the more maddening by the fact that promised sequels (and answers) failed to materialise for nearly a decade.

Fortunately the half of the game set in Stark does offer these conclusions, and a wider range of locations. The harsh, futuristic cityscape presented in ‘The Longest Journey’ is expanded considerably, and ‘Dreamfall’ crosses from sunny Casablanca, frozen Russia, high tech-Japan and also gives you a little pinch of nostalgia in the now downtrodden Newport. Zoe’s quest to find answers about the fate of her boyfriend lead to some genuinely heart breaking discoveries, an intriguing moral quandary and a soulbreaking conclusion. It’s a shame the Arcadia sections of the game don’t offer as much excitement to match Zoe’s discoveries in Stark.

Several characters from ‘The Longest Journey’ return, along I think, with most of the original cast. Brian Westhouse is upgraded from a cynical hard-bitten alcoholic to an integral plot point and briefly playable character. Sidekick Crow also returns briefly as do a few others. These really help tighten the links between the two games, and showing what occurred to characters from the first game after its conclusion is always interesting. As before the voice acting and sound design is top notch and the writing just as strong as before, if maddeningly vague.

I can’t rate Dreamfall quite as highly as its predecessor but there’s no doubt that this is still a superb experience. Zoe Castillo’s story is heart breaking, and although April Ryan and Kian Alvane do not receive the attention deserved, Dreamfall does ‘just’ stand up as a complete adventure. The walk and touch mechanic is slow and clumsy and clearly showing its age but it doesn’t prevent the soul of the game from shining through. If you can tolerate extended cutscenes and appreciate a story that doesn’t bother dumbing down then this might be for you.